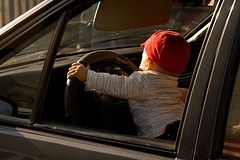 If you are a young driver (under 25), or if you are buying a car for a young driver, you should definitely consider a used car. Often times young drivers end up with a new car because there are a lot of positives for young owners — new cars are safe, reliable, and usually offer some sort of first-time-buyer financing or rebates. New cars also tend to get young buyers really excited. However, before you go to the local dealership and buy a brand new vehicle, consider the following:

1. Younger drivers are most likely to trade-in their new car too soon. Young people — don’t take this the wrong way. We’re not saying that you’re irresponsible because you want to trade-in your car every year. What we’re saying is that younger drivers, as a whole, have the most life-changes of any buying group. Think about it — odds are very good that a person 25 or younger will do one of the following:

The fact is that the best part of being young is that you don’t have to make any commitments or any long-term plans. You can be in college one day, and living in downtown Boston the next. Single today, married with a child this same time next year. Living in a big city now, living in a small town tomorrow. You get the idea.

Because young people’s lives change so much so quickly, it’s almost impossible to buy the right car. The new 4-door economy car you buy today sounds great, but what if in two years you need a 4×4 to get to work? That new coupe seems like the perfect car, but what if you have a family? In fact, you could buy a car and then get offered a job in a big city where you don’t need a car. Because things can change so much, the best bet is to buy something cheap and reliable until such time that you know what’s going to happen for the next few years.

2. Young drivers tend to be hard on new cars. OK – this point is a little personal. Hopefully, we haven’t offended anyone. It’s just that, in our years of experience in the car business, a car owned by a young person usually has more wear and tear than a car owned by just about anyone else. Maybe it’s all the partying, all the hauling your friends around, or maybe it’s just that you’re too busy to worry about anything else. We know it’s not a reflection on your character, just a circumstance of your situation. But no matter why it happens, the fact is new cars with excessive wear and tear are very hard to trade-in. Buying a new car and tearing it up can result in you having to keep that car until it’s paid off — for a lot of young people, that might as well be forever. With a used car, you can’t hurt the value as much if you tear it up. It was cheaper to begin with.

For parents buying cars, here’s another thought to consider: If you buy your young driver a new car, what life lesson are you teaching them? Better to buy them a safe, reliable, and cheap used car than a nice new car. That way they’ll learn they have to earn the best things in life just like you did. At least that’s our opinion.

3. Young drivers should buy used to save money. People under 25 already have enough to worry about — why should they saddle themselves with a big car payment? School, high auto insurance costs, and a healthy social life all cost money. Since most young people have to start out in an entry level job, should they really commit themselves to a big new car payment? After all, no one wants to see them move back in with their parents…

We hope that our frank advice here wasn’t offensive to anyone under 25, but we want to make it clear how many young people we’ve seen struggle with car expenses. While it’s extremely tempting to buy a nice new car when you’re a young person, we’ve seen it backfire more than half the time. I can’t tell you how many times I sold a new car to a young person, after suggesting they consider a less expensive used car, only to see them return a year or two later and try to trade that same car in. Had they bought the less expensive used, trading would have been much simpler. In fact, had they bought a less expensive car in the first place, they probably wouldn’t need to trade at all.