If you’re thinking about buying a car on eBay or Craigslist, use the following checklist to make sure you’re not dealing with a fraudulent seller. 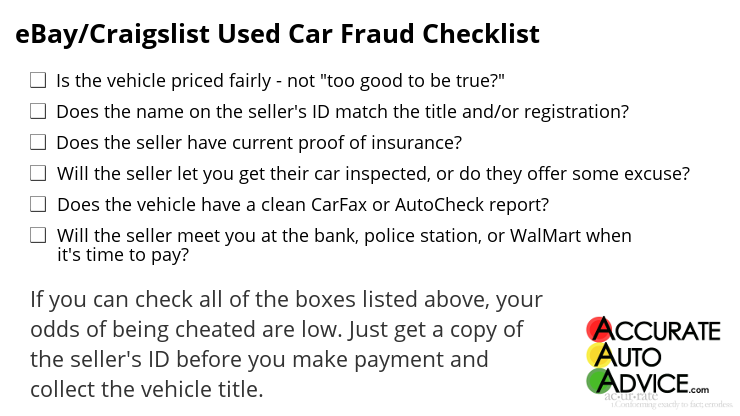 1. Is the vehicle priced fairly? If you’re paying a price that’s “too good to be true,” chances are good you’re being cheated. Often times, vehicles that are being offered for thousands less than their market value are salvage titled. Sometimes, they’re stolen property. Either way, you don’t want to buy this type of car.

2. Is the person selling the car the same person that’s listed on the title and/or registration? One of the easiest ways to tell if you’re being cheated is to compare the name on the seller’s ID to the name on the vehicle title and/or registration. People who sell cars they don’t actually own are called “curbstoners,” and they usually have a great explanation as to why they’re in this position. They’re selling a car for their great aunt Ida, or for their brother-in-law who’s in the Army, etc. Sometimes these are real excuses, but usually they’re just BS.

If the person you’re talking to isn’t the person listed on the title or registration, or they won’t let you see their ID to confirm that the names match up, ask to meet with the vehicle owner before proceeding. If that isn’t possible, walk away.

4. Will the seller let you get the car inspected by a mechanic or vehicle inspection service? Someone who’s selling a car that’s stolen or that has a major problem (like flood damage) usually doesn’t want their car inspected.

However, rather than giving you a flat-out “No” when you ask the seller about an inspection, they’ll give you some reason that an inspection isn’t necessary, or they’ll make up some excuse. If the seller tells you that you don’t “need” to do an inspection, and then hands you a copy of an inspector’s report, beware. Same goes for any seller that agrees to meet for an inspection, but then has some last-minute excuse.

5. Does the vehicle have a clean CarFax or AutoCheck report? While these reports aren’t 100% accurate, they’re relatively good at spotting cars with title problems (like a car that has a “washed” title), and they can also help you identify a car that’s a manufacturer’s buyback (a so-called “lemon”).

6. Will the seller meet you at the bank, police station, or WalMart when it’s time to pay? First, you should never bring payment with you when you first look at a car. Don’t even think about paying for a car until you’ve seen it and taken it for an inspection.

Second, assuming all your ducks are in a row and you want to buy the car, ask the seller to meet you at either:

The above list is not comprehensive, but if you follow these rules your odds of being taken advantage of by a private party seller are much, much lower. To be clear, we don’t make any guarantees here. Even if you follow our checklist, you should absolutely get a copy of the seller’s ID and a signed buyer’s agreement before completing your purchase.