The Toyota Motor Corporation received eight awards in the 2012 Vehicle Dependability Study conducted by J.D. Power and Associates, the global marketing information services company. Four Toyota, two Scion and two Lexus models finished first in their respective segments, with each of these brands finishing in the top five among the 32 brands reported.

The 2012 study takes a look at owners of 2009 vehicles and their reports of problems. Overall dependability is determined by the level of problems experienced per 100 vehicles (PP100); the lower the score, the higher the quality. 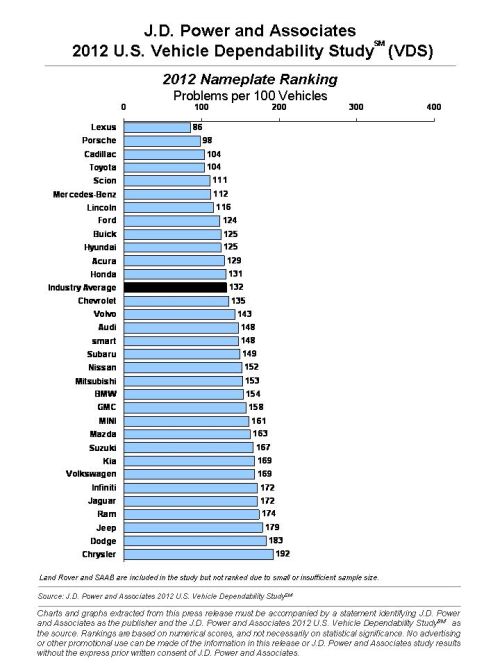 Among brands, Lexus easily finished first, with owners reporting 86 problems per 100 vehicles over the past 12 months. Porsche was second at 98 PP100 and Toyota tied with Cadillac for third at PP104. Scion placed fifth with a score of PP111. The industry average was PP132 with 12 brands beating the average and 20 finishing behind the curve. Importantly, scores surged in the latest study with the average increasing by 19 points.

Other Toyota brand models performing well included the Toyota Camry in the midsize segment, finishing third behind the Ford Fusion and Mitsubishi’s Galant. Toyota’s Avalon finished behind Buick’s Lucerne and ahead of the Ford Taurus among large cars. Among compact SUVs the Toyota RAV4 placed third behind the Chevrolet Equinox and the Honda CR-V. The Toyota Highlander finished third in the midsize SUV segment, behind first-place winners the Ford Explorer and the Nissan Murano.

Lexus, Toyota’s luxury brand took top honor in the entry level premium car segment as the ES 350 tied with the Lincoln MKZ. In the midsize luxury crossover category the Lexus RX350 won out. Scion’s two winners were its tC compact sporty model and its xB, winner of the compact MPV segment.

The annual Vehicle Dependability Study is a good measure on how cars will perform once they have been owned for several years. Keep in mind that we’re looking at 2009 models — vehicle offerings change as do customer perceptions. Yet, if you’re looking for a trustworthy source for gauging a brand, then the Vehicle Dependability Study offers you a measurement you’ll want to keep in mind the next time that you shop for a new or a dependable used car.