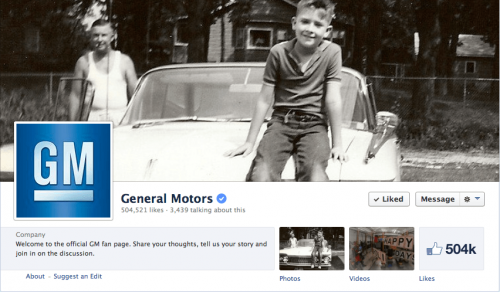 General Motors, once dubbed a company that just didn’t “get” social media, is actually #7 on CNN’s list of Fortune 500 social media stars. They now have a command center for their social media pages that resembles a control room of an air-traffic controller — this center is used to listen in on social media activity directed towards GM and general GM chatter.

Different auto makers have their own strategy when it comes to their social media efforts. General Motors makes it a point to build brand awareness by interacting with people on Facebook pages, sending out tweets about launches, and sponsoring content on forums and blogs. Not every auto company has a dedicated staff to social media, but those who have the best interactions do.

Major auto companies comb through Facebook, twitter, Instagram, and many other enthusiasts sites for customers who have issues with the brand that could damage their image, or for people in need of help.

This is an amazing way for them to use this feedback constructively to detect problems early on before they get to a level that could hurt their sales. It also shows customers that the companies are hearing their complaints and taking them into consideration.

Most of the monitoring goes on for their current customers but they also seek out people who are in the market for a new vehicle. As every good sales manager knows, keeping a customer is much easier than getting a new one, and that’s no different for auto makers.

Building this kind of relationship with customers, old and new, is smart. It is a solid response to the evolved way people interact — it both puts a product in front of people more effectively and gives them a less frustrating way to tell auto companies about their complaints.

So if you want to get through to the maker of your vehicle with a complaint or suggestion, should you just turn to social media outlets instead of picking up the phone? Maybe, it depends on which company made your vehicle and how urgent your issue is.

If your issue is something that’s just frustrating you and the dealerships aren’t helping as well as you’d like, complaining publicly on their Facebook page could get a response very quickly. Signing up on a forum with a representative for the brand might be the most direct way to get help — many brand specific forums have new car/manufacturer sections to complain about specific issues.

On the other hand, there are many major auto makers that don’t invest much effort into social media, so don’t be surprised if you don’t get any response out of some brands. Picking up the phone or driving to your closest dealership is still the most effective way to get an issue resolved with your vehicle.