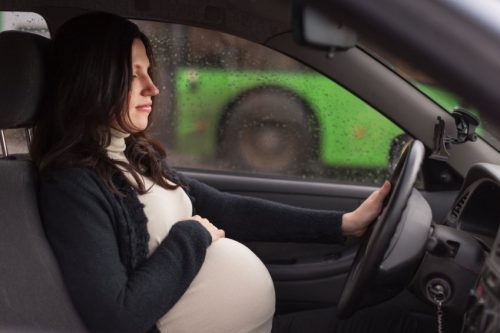 Study Shows Pregnant Women at Risk on the Road

Experts are at a loss as to why this happens but the findings are pretty clear. This should alert women who are pregnant to take extra precautions behind the wheel. It’s no reason to stop driving entirely, but it is a reason to be on high alert.

The findings also do not push towards woman handing over the wheel to their husband while their expecting. Men are still more likely to be in an accident, even with the 42% increased risk for women in their 2nd trimester.

Published May 12th in the Canadian Medical Association Journal, of CMAJ, the study is based on records of more than 500,000 Canadian women. The drivers in the study gave birth between 2006 and 2011. Researchers looked at the rate of serious accident that were bad enough to send the woman to the ER, both during the three years before pregnancy and during pregnancy.

The pre-pregnancy crash rate was around 4.5 per 1,000 women annually. During the first trimester, the numbers were similar, but then it jumped to 7.7 per 1,000 starting the first month of the second trimester. For the ground in the third trimester, it again dropped.

The second trimester jump was even amongst age groups, income brackets , and education levels. It was also a number that didn’t change according to the season.

It’s hard to blame pregnancy directly since researchers aren’t clear as to what the cause of this phenomenon specially is. They seems further thrown off by the third trimester drop in accident rates.

One could speculate on a combination of stress, fatigue, and hormones causing pregnant drivers to experience haziness behind the wheel — leading to mistakes that lead to crashes. Women in this trimester usually go about their normal activities without being hindered by the more outward physical changes of pregnancy, which could explain the drop during the 3rd trimester, but there’s no real evidence to support that notion.

Regardless as to why accident rates increase for pregnant women during a particular trimester, it’s important to emphasize safe driving while pregnant. Just because experts aren’t sure what causes a woman in her 2nd trimester to be at a higher risk, it doesn’t mean the wrecks aren’t preventable.

Obeying the speed limit, stopping fully at stop signs, yielding, and minimizing distractions are always important, but especially so for pregnant women. Now’s also a good time to make sure your own a vehicle equipped with the essential safety features, like these according to the Olathe Toyota Parts blog:

If your vehicle isn’t equipped with these features, it might not be a bad time to trade-up, especially with a baby on the way anyways.