President Obama signed an order today that will allow all 50 US States to set their own emissions and fuel economy standards. While this move has been applauded for it’s emphasis on individual rights, it’s a poorly thought-out decision. Allowing each and every state to create their own fuel economy and emissions rules will effectively create 50 different auto markets, 50 different regulatory authorities, 50 different emissions testing procedures, etc. The net effect? Higher costs for automakers and consumers, and a host of unintended consequences. 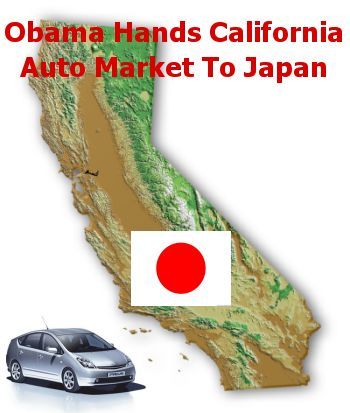 With one signature, President Obama granted an overwhelming advantage to Japanese automakers Honda and Toyota when he allowed California to set it’s own fuel economy and emissions regulations.

Take California’s stringent fuel economy and emission standards that were passed a few months ago. Here’s what’s going to happen now that California can enforce it’s own standards:

1. There will be fewer model choices for California residents as most automakers will simply stop selling certain vehicles in California (as VW did with the Jetta Diesel a few years back) in order to meet the fleet fuel economy and/or emissions standard. While many Californians will appreciate the fact that they’ll no longer be able to buy certain trucks, SUVs, and gas-guzzling sports cars, quite a few California residents will not.

2. Guess what? Different rules for different states = more expensive vehicles for everyone. The auto business is all about economies of scale. If each state can set it’s own standards, an automaker could conceivably have to buy different parts for each vehicle sold in each state. That’s going to be expensive.

3. Automakers that specialize in small, fuel efficient cars will have a significant advantage going forward. Unfortunately for the U.S. auto industry, that means Toyota and Honda will likely grab even more market share in one of the USA’s biggest auto markets. Some people may applaud, but I don’t think it’s in anyone’s best interests to see GM or Chrysler collapse because they can’t effectively compete in California because of a poor model mix. Don’t get me wrong, this is a problem that they created for themselves, but we are in an economic crisis…we should be finding ways to minimize to potential for crisis.

4. People will cheat. Just like Californians did back in 2006 to buy new VW Jetta diesels that were technically illegal in CA, people will drive or fly to a state without strict fuel economy and emissions regulations, buy and illegally register a vehicle they can’t buy in California in a different state, and then legally register their “used” vehicle in California…all in order to bypass the law set up by California’s legislature. If you doubt this will happen, you don’t need to look back further than 3 years to see thousands of examples of this very behavior.

5. As people leave California to buy and illegally register cars in other states, California’s sales tax and vehicle registration revenue will drop.

6. As Honda and Toyota grab market share in California, you’ll see more Ford, GM, and Chrysler dealerships go out of business. The net effect is that California will lose jobs.

At the end of the day, this rule only serves to undermine California’s auto market and economy. It’s the epitome of foolishness. I know all of the above will happen because it’s simply a repeat of events that have already occurred. We’re all supposed to learn from history, aren’t we?

Hopefully, the automakers will manage to strike down this order by way of the interstate commerce clause in the U.S. Consitution…but it’s going to be interesting. Shame on you President Obama, you took the coward’s way out on this issue. It would have been better for the country if you had simply made a strong rule and forced everyone to adopt to it.