Once a fairly unnoticed niche in the auto industry, special police vehicles get the star treatment by the mainstream when they are unveiled. In recent years, automakers have invested a lot of time and marketing into their police models, an area of the market once overlooked. 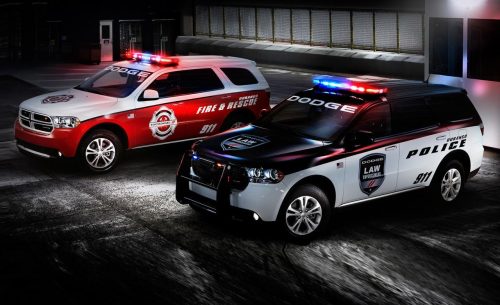 The latest news in this niche is that Dodge is making a police edition 2014 Dodge Durango for use at police departments and fire stations across the country. This newest addition to the police and fire department fleet vehicles is known as the Special Service Vehicle version of the Durango and will be available to departments very soon.

Although it is beefed up for special use, it is not exactly a pursuit vehicle, so it won’t be the main ride for most officers. It lacks the proper chassis tuning for high speed chases and SUVs, by design, aren’t the best for high-speed driving and intercepting. Although, Ford has pulled off a pursuit rated SUV in the Explorer and Chevrolet has its pursuit rated Chevy Tahoe SUV.

Still, even with the pursuit rating, the Dodge Durango Special Service Vehicle is hardly anything to scoff at. The mid-size SUV will be outfitted with HD brakes, HD battery, engine oil cooler, and high flow water pump — this is to compensate for the long idling periods & constant running common with fleet use & so the vehicle can handle the extra communication gear.

While no comment has been made about the EcoDiesel availability in the Durangos, that seems like a logical option for the police & fire vehicles. The EcoDiesel, set to premier in the 1500 Ram, has 420 lbs-ft of torque, gets 25 highway mpg, and tows 9,200 lbs, so it would seem more fitting should it become available for Durango use.

The Detroit Three all offer a variety of vehicles for emergency personnel use — ranging from high-speed cars to SUVs and even trucks for first responders.

What Other Police Vehicles Are In Use?

Ford’s Taurus with the EcoBoost V6 has gained much notoriety for having the best acceleration for a police vehicle. Chevy’s Impala police vehicle is actually being sold in Australia with the Caprice badge and rear-wheel drive platform.

Chrysler’s rear-wheel drive Dodge Charger Pursuit with Hemi V8 is a speedy part of the force in many agencies across the country; the auto maker also offers agencies a Ram pickup on steroids.

What this all means for the average citizen is that the departments you count on to respond to emergencies are becoming more efficient in their response to the need of the citizens they protect. It also means that those cop cars in your rearview are now equally as impressive as they are intimidating.