When it comes to changing your own oil, you can save yourself a ton of money by buying the filter and oil and change it yourself — but it can be risky since you won’t have a lift at home to change it with. 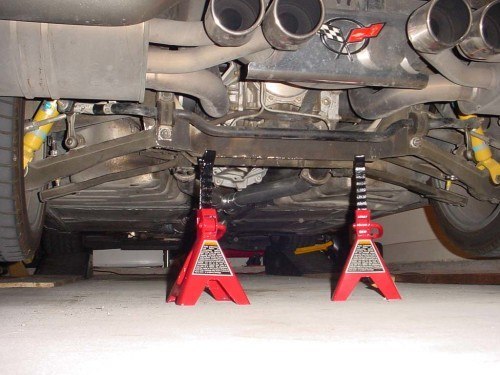 Working on your own car can be exceedingly dangerous, especially for beginners. From the garage tools to the car itself, there’s plenty of ways to hurt yourself or someone else — and considering it could come down to your body versus a 2 ton (or more!) vehicle, safety for the at-home mechanic is imperative.

Let’s jump right in and talk about getting the car up in the air and ready for work. Most car jobs, even small ones like oil changes, are going to require the wheels being off the ground, and right from the start it’s a risky situation.

I personally do not recommend using drive up ramps because I see the potential for too many things to go wrong based on user error.

Jack stands are another popular at-home lifting device for mechanics, and good jacks are not something to skimp on! Call it over-kill, but I buy jacks that are rated to hold the weight of my car on one (meaning if I found someway to put a single jack stand in a point where it would support the entire weight of the vehicle, it would be possible for it to hold it without breaking first).

It should also be noted that you shouldn’t use anything other than equipment meant to hold up a car, i.e. no cinderblocks or old wheels to support the car in the air.

All it takes is one slip or vibration in the wrong area to destroy makeshift tools and under rated equipment.

Another consideration about working under a car lifted in the air is where it’s lifted. Solid pavement is the ONLY place a car is safe on jack stands.

A crashing car is no joke, you won’t win against a car collapsing while you’re under it. Even if you’re only part of the way under it, you could be facing life changing injuries.

Here’s a quick run down of the process: