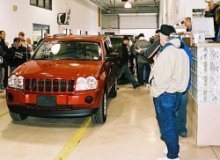 First of all, when you buy a car at auction, you’re buying it “as-is.” While auctions will advertise that they’ve inspected all the cars, these inspections are usually cursory and unreliable. When I worked as a used car manager, I often found major problems on vehicles that auction inspectors were supposed to catch (frame damage, major mechanical issues, etc.). I always paid for frame and mechanical inspections, and because I worked for a dealership and had a relationship with the auction, I was able to hold them accountable for poor inspections (and get my money back). As an individual consumer, you probably won’t have that kind of leverage. If you buy a lemon at a public auto auction, you’re probably going to be stuck with it.

Secondly, auctions require you to buy a car pretty quickly. Even as a used car manager tasked with buying dozens of vehicles a week, it was a hectic process. If you’re not very careful and attentive, you can make a mistake. I’ve failed to notice damage and bid too much, and I’ve even had auctioneers “run me up” with phantom bids, etc. Auctioneers are clever and they’re paid based on how many cars they auction off. They WILL try to trick you.

Finally, “public” auctions are usually filled with cars that licensed dealers had no interest in. Dealers like to buy cars they think they can sell for a profit – everything else they ignore. Cars that are ignored by dealers are usually taken to a “public auto auction” where they’re sold to less knowledgeable consumers. (This is only true of most public auto auctions, but true government auto auctions are made up of government fleet vehicles that can be bid on by anyone). If you decide to buy a car at auction, here are some tips:

1) Decide what kind of car you want before you go. Before you start buying cars at auction, you should know what you’re at the auction to buy. A lot of big mistakes are made when you buy a car you know nothing about, so choose a specific make and model (i.e. a 2002-2006 Silverado 4×4), and then only buy that model. Make sure you know what to look for, what to check for, etc. Also make sure you know what to pay. Check edmunds.com, kbb.com, and nadaguides.com for price info. Don’t bid on a car unless you know everything about it – that’s how you make a mistake.

2) Don’t feel like you need to buy when you go to the auction. One of the biggest mistakes first time auction attendees make is feeling pressure to buy. My advice is to go to a few auctions and just watch – don’t bring any money with you. Just watch and learn. You’ll be amazed at how much you can learn watching a few auctions.

3) Leave your ego at home. If you find a car you like and you start bidding, you might have a little competition. Nice cars always have a few bidders, and someone might decide they want the car more than you. If a bidding war erupts, don’t let your ego get the best of you. Don’t spend more than you should just to beat another bidder. Besides, that ‘other bidder’ might be a shill – someone who works for the auction whose job it is to artificially raise prices. It’s illegal, but it happens all the time.

4) Look in your local new car dealer’s “back lot.” Buying at an auction is hit or miss – you need to be very careful and a little lucky to find a good car. But buying an inexpensive car out of your local dealer’s back lot is easier and safer. Most new car dealers will sell you a car out of their back lot so long as you agree to buy “as-is” – they’ll even let you take it to a mechanic before you buy.

I’m not a big fan of buying at an auction – you can almost always find a better vehicle on a dealer’s lot for about the same price.